Havelock is one of eight cities in the world named after Sir Henry Havelock, a British Officer in India, who distinguished himself in 1857 during what was known as The Indian Mutiny. Originally named "Havelock Station" in the late 1850s when the Atlantic and North Carolina railroad built a depot where its right-of-way crossed what is now Miller Boulevard in Havelock. The town was the initial landing point for an American Civil War battle known as the Battle of New Bern. 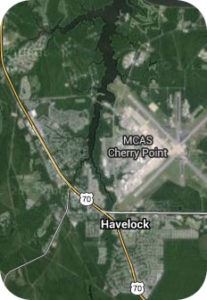 Inlet for an expedition against New Bern. On March 13, the fleet sailed up the Neuse River, anchored at Slocum Creek, and disembarked infantry on the river's south bank. Elements of the Rhode Island Heavy artillery came ashore near the location of the Officer's Club on Cherry Point Marine Corps Air Station and also near the Carolina Pines Golf and Country Club. The Federals captured nine forts and 41 heavy guns and occupied a base. The Federals transited Havelock from New Bern on their way to the Battle of Fort Macon. Despite several Confederate attempts to reclaim the town and the surrounding area, the Federals did not withdraw until after the end of the war.

Existing records indicate that the production of naval supplies including turpentine and tar were very important in the local economy during the 19th century. With the invention of the steam engine, the demand for tar and turpentine slowly evaporated as fewer wooden ships were constructed. Many distillers of turpentine turned to the production of moonshine to make ends meet.

In 1940, Havelock became the home of Cherry Point. The Naval Aviation Depot (NADEP) located on the air station provides employment opportunities for local residents. In 1959 the town was officially established.